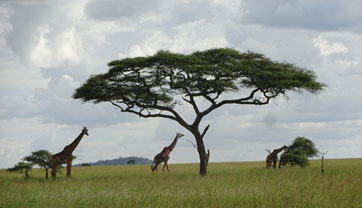 Nothing can quite match the draw of the mysterious continent of Africa or the adventure of a wildlife safari in the bush. This was certainly true for this software company’s incentive. They had taken their top sellers to Nevis, Thailand and Morocco for previous TopSail incentives. Understandably, the cachet of Africa and Tanzania was unmatched.

In a destination such as Tanzania, there is great potential for problems which can only be matched by an equally great need for being ahead of the game every step of the wa
y. In Africa, we have a hand-in-hand partnership with the best destination management company and demand nothing short of excellence. MFactor professionals have a reputation for being picky and demanding in the best way and this is especially critical when we are working in a destination that can almost guarantee unexpected challenges!

Staying Ahead of the Game…Pre-Program and Onsite
Strategic preplanning focused on not only the typical nuts and bolts of a program but also addressed some of the unusual scenarios we felt were possibilities. Our team brainstormed potential “what if’s” well before program operation and developed solutions to have ready if any of these situations arose. In addition, onsite flight schedule changes presented unexpected potential delays which required our prompt resolution.

Exotic destinations present unusual experiences and challenges. MFactor professionals have years of solid experience that allows them to put their know-how with the unexpected to work and stay one, two or even three steps ahead to deliver seamless excellence.

We use cookies on our website to give you the most relevant experience by remembering your preferences and repeat visits. By clicking “Accept”, you consent to the use of ALL the cookies.
Cookie settingsACCEPT
Manage consent

This website uses cookies to improve your experience while you navigate through the website. Out of these, the cookies that are categorized as necessary are stored on your browser as they are essential for the working of basic functionalities of the website. We also use third-party cookies that help us analyze and understand how you use this website. These cookies will be stored in your browser only with your consent. You also have the option to opt-out of these cookies. But opting out of some of these cookies may affect your browsing experience.
Necessary Always Enabled
Necessary cookies are absolutely essential for the website to function properly. These cookies ensure basic functionalities and security features of the website, anonymously.
Functional
Functional cookies help to perform certain functionalities like sharing the content of the website on social media platforms, collect feedbacks, and other third-party features.
Performance
Performance cookies are used to understand and analyze the key performance indexes of the website which helps in delivering a better user experience for the visitors.
Analytics
Analytical cookies are used to understand how visitors interact with the website. These cookies help provide information on metrics the number of visitors, bounce rate, traffic source, etc.
Advertisement
Advertisement cookies are used to provide visitors with relevant ads and marketing campaigns. These cookies track visitors across websites and collect information to provide customized ads.
Others
Other uncategorized cookies are those that are being analyzed and have not been classified into a category as yet.
SAVE & ACCEPT